Before we get started talking about insulin, I’ll share a quick story.

A few weeks ago, I was chatting with a friend of mine that just happens to be a doctor. We were talking about Type II diabetes and how it’s a condition that can largely be reversed in most cases through diet and exercise. He’s worked with many Type II diabetics in the past, prescribing them medication and sending them away with some pamphlets and the disclaimer that they should “exercise more and eat better.”

Even he recognizes that this is a flawed approach. At best, his patients are going to take their medication and get their blood sugar under control. In most cases, they don’t change their diet or start exercising more. They spiral even further down a bad rabbit hole.

Ultimately, doctors often don’t have the time to educate each patient on the ins and outs of their condition. Their goal is to treat the disease, which they often do through prescribing medication.

Our goal at CrossFit Undeniable is to build a kickass community of healthy, happy individuals that can thrive into their 90’s and beyond. In order to do that, we try to arm everyone with basic information about their health and fitness, playing some small role in improving the health landscape around us.

So, with that in mind, we’ll start publishing more blog posts that I’ll call “Cornerstones” – topics that everyone should know the basics about. First up, insulin.

A little over a year ago, we published a book review of Why We Get Fat by Gary Taubes. He argues that we don’t get fat because of the two main culprits often cited – eating too much and moving too little. At least, those aren’t the root causes.

Instead, he points a big finger at insulin as the primary culprit:

The bottom line is something that’s been known and ignored for almost 40 years the one thing we absolutely have to do if we want to get leaner if we want to get fat out of our fat tissue and burn it, is to lower our insulin levels and to secrete less insulin to begin with.

You’ve probably heard of insulin as it relates to Type I and II diabetes, but you might not know how it works (or even what it is). Here’s a quick primer.

Simply put, it’s a hormone secreted by your pancreas – one of the many hormones produced by your body.

It’s main role is energy storage. It shuttles glucose (carbohydrates), amino acids (proteins), and fats from your blood stream into your cells for energy storage.

Your pancreas is always secreting low levels of insulin to keep blood sugar levels in check, but levels really spike after a meal, especially if the meal is high in sugar. The pancreas shuttles insulin into your blood stream to deal with the influx of glucose, amino acids, and fats from the meal. Insulin to work by shuttling these molecules into your cells for use or storage.

That’s largely it – insulin is responsible for storing energy you get from the food you eat.

It’s important to understand that insulin is not bad. It’s critical (as we’ll read here in a second)! You just need to keep it at the right levels.

As you probably know though, there are two different types of diabetes.

For reasons that aren’t quite certain, the body’s immune system destroys the cells in the pancreas responsible for producing insulin. As a result, Type I Diabetics can’t produce their own so they have to take insulin to help regulate blood sugar (otherwise, they would die).

Remember the boy that cried wolf? He cried wolf so often that everyone started to “tune him out.” Then, when the wolf actually came, no one was listening.

That’s a bit like Type II Diabetes. Due to a host of reasons (poor diet being high up there), insulin levels are constantly elevated. As a result, cells become “insulin resistant” meaning they don’t listen to the cue to bring in glucose, protein, and fat from the blood.

The end result is chronically high levels of insulin and blood sugar at the same time – a nasty combo.

Back to Mr. Taubes for a moment, he claims the one thing we need to do to stay lean is “to lower our insulin levels and to secrete less insulin to begin with.” Let’s think about why that might be the case.

Insulin is involved with energy storage; it pulls nutrients out of the blood stream and stores them in our cells. Since it’s involved in energy storage, it also inhibits fat breakdown. Insulin is very greedy; it sends a signal to hold on to anything and everything. With Type II diabetes, insulin is chronically elevated all the time hence more fat storage.

And that’s the background on insulin! It’s critical to understand because Type II diabetes, in particular, is becoming increasingly common, and it leads to a whole host of issues (gaining weight is just one of them).

If there’s something you want us to cover, email info@crossfitundeniable.com. We’ll be happy to dive in! 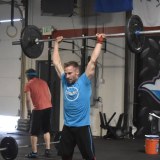 Daniel Hancock is the head coach and Owner of CrossFit Undeniable in Westminster, Colorado. He works on setting the larger vision and direction for the gym, but you'll find him coaching classes as well.